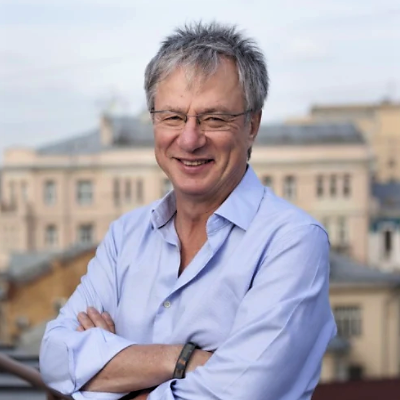 Alexander Galitsky is a Managing Partner of Almaz Capital Partners, a venture fund with offices in Moscow, Russia and Portola Valley, CA, which is backed by Cisco Systems, EBRD and IFC, which he co-founded in 2008. Alexander is a well-known innovator, entrepreneur and investor in Russia/CIS, Europe and USA. Prior to Almaz, Alexander formed the ICT investment practice at Russian Technologies, one of the first venture capital funds in Russia and made a series of private successful investments. His past and current investments include: Parallels, Yandex, QIK (sold to Skype), Vyatta (sold to Brocade), Acumatica, Jelastic, NavMaps (sold to TeleAtlas), 2Can, Alawar, AlterGeo, SJLabs (sold to VocalTec), EverNote, GridGain, WikiMart, among others.

Prior to his investment career, he founded five successful high-tech companies, ELVIS , TrustWorks Systems (sold to Hamsard), EzWIM (sold to TMT Ventures), ELVIS Telecom (sold to Telenor) and NPC ELVIS, all of which he led as CEO . He pioneered in WiFi and Virtual Private Network technologies and product development on the global market in partnership with Sun Microsystems and was a pioneer of the Russian internet industry back in the 90s. Prior to becoming an entrepreneur, Alexander served as one of the top technical executives for the Soviet space industry, where he worked on the MIR space station and the Soviet “Star Wars” response.

He has over 30 patents for numerous inventions, including parallel processing, WiFi and VPN security technologies. Alexander was honored numerous times as the most influential person in the Russian IT and Internet industry by Forbes, best GP of 2013 by Venture Awards, was nominated for best venture capitalist of the last decade in Europe in 2012 by Investor AllStars and named “Technology Pioneer” at the World Economic Forum in Davos in 2000 and EY Entrepreneur of the Year in Russia in 2013.

He received his PhD in Computer Science from joint authority of Defense Research Institute and MIPT and graduated from MIET from the physical science department. Alexander serves on the Skolkovo Foundation Board and as Chairman of the advisor committee for Russian Venture Company.