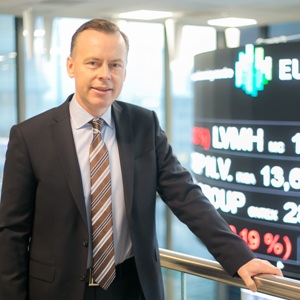 He started off his career after high school in the Royal Norwegian Navy, where he became a Second Lieutenant. Thereafter, he left his native Norway in 1988 to study business in Fribourg in Switzerland. Posts in his career include environmental management, corporate banking, securitization and management buy-outs at UBS, Private Equity at 3i, corporate incubation at Sulzer, venture capital at New Value, Corporate Finance and Capital Markets at PwC before he now the last 5 years has been active as an interim manager for change in fast growing companies.

Søren has a doctorate in Leadership and Change in SMEs and enjoys communicating in his native Norwegian, English, German & Swiss-German, French and Spanish apart from the other Scandinavian languages. He has lived in Norway, Nepal, England and in Switzerland (overall 25 years).

Søren joined Euronext in February 2017 because he was thrilled to see the opportunities this stock market offers tech companies.