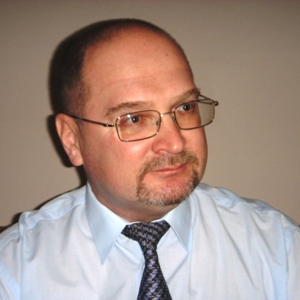 Vladimir brings over 20 years of M&A and private equity experience in Russian and CIS markets as well as business strategy development across sectors. As Head of Division at the Russian Statistical Agency, Vladimir formed a joint venture with the participation of ING Bank and subsequently led a number of business search projects for such multinationals as Toyota, DAF, Van Melle and Campina. He oversaw several consultancy projects on behalf of EBRD, World Bank and EU-TACIS in Ukraine, Belarus, Kyrgyzstan and Mongolia.

In 1996, in consortium with Rabobank, Holland, Vladimir and his team won the tender to run the EBRD-financed Regional Venture Fund with a mandate to invest EUR 30M in qualified Russian companies and to support their business growth and development activities. In 1999 the Fund was transformed into Eagle Venture Partners Fund with $100M in AUM.

In 2003 Vladimir joined one of the former Fund’s investee companies as Business Development Director. He headed a task group for developing the company’s long-term corporate strategy which helped the firm to reach number one position in the Russian market and to triple its revenues over a period of five years.

Since 2016 Vladimir has been an Independent Investment Committee member of PEF Zubr Capital (Belarus).

Vladimir has extensive knowledge of capital markets development in the CIS, with notable expertise in Russian and GAAP finance, banking, regulatory issues, tax, joint stock company law and corporate governance. He also served on the Board of the Russian Venture Capital Association (RVCA) and was it’s Administrative Council Chairman in 2001-2003.

Vladimir holds a MS degree in Economic Cybernetics from the Moscow University for Economics and Statistics.

Vladimir Burenkov
Manage Cookie Consent
To provide the best experiences, we use technologies like cookies to store and/or access device information. Consenting to these technologies will allow us to process data such as browsing behavior or unique IDs on this site. Not consenting or withdrawing consent, may adversely affect certain features and functions.
Manage options Manage services Manage vendors Read more about these purposes
View preferences
{title} {title} {title}